The International Olympic Committee (IOC) is protecting its advertisers and television sponsors while gagging Olympic athletes. The instructions from IOC are specific:


Postings, blogs or tweets should be in a first-person, diary-type format and should not be in the role of a journalist. Participants and other accredited persons cannot post any video and/or audio of the events, competitions or any other activities which occur at Olympic venues. 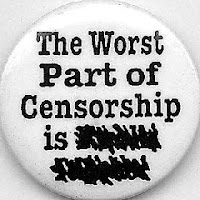 There is also a restriction on talking about the competition in any form of media. I think there will be confusion on the part of readers and viewers.  On one hand, we will see "anything goes" on the field and then we will read about "the Olympic spirit" online.

I do not approve of censure of media in any form.I think the athletes should be able to freely state their point of view and that would include analyzing their performance as well as the performance of their competitors.

In addition, some of the athletes may be coming to the Olympics from a country ruled by a repressive regime and this may be the only time they COULD HAVE written their true thoughts.


Censorship is never over for those who have experienced it. It is a brand on the imagination that affects the individual who has suffered it, forever. Noam Chomsky

What do you think?
Posted by CyberCelt at 7:24 PM