Read about Rick Perry's Less Than Stellar Career in Texas

It seems as if we just elected a President, yet here we go again.  What a waste of time and money.  One newcomer to the presidential contenders is Governor Rick Perry (Texas).  He slid into a ten-year stint as governor when George W. Bush ran for POTUS. Now, he wants to be President.

While Governor, he has made quite a bit of money and indebted many people to him.  He awarded Enterprise Funds and other capitol to supporters of his campaign.  He managed to alienate most people in and out of Texas, including the President of the US.  He also spent a lot of time making movies.  So much, I think he might be able to act like a president.

Here are the movies in which he appeared.

2008 Inning by Inning: A Portrait of a Coach (documentary)

2005 The Three Burials of Melquiades Estrada

Now, we have a man (Perry) that is willing to play President.  Many do not want him in that office. In particular, Robert Morrow (a Ron Paul supporter) placed a full-page ad in the Austin Chronicle asking that if anyone has dirt on Perry, please come forward. 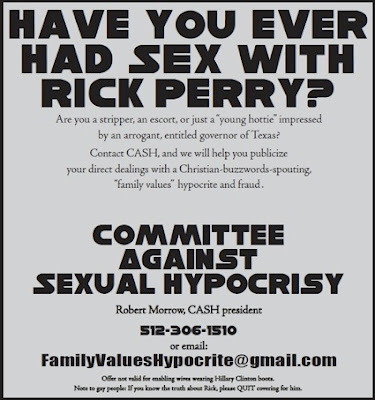 I just love politics! Nothing but the issues! Fair play and statesmanship . . . someday?
Posted by CyberCelt at 12:38 AM

Thanks for a great blog with many interesting posts!

Pretty hilarious. Perry should be more vigilant with his every move now.

Well, he will be the most handsome president just in case.

Hi thanks for posting a awesome blog on politics